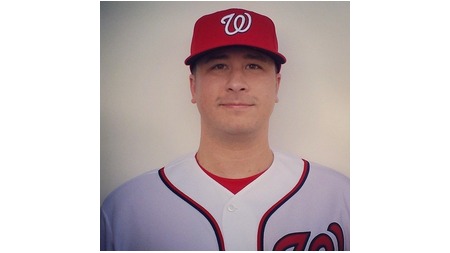 Tyler has over a decade of pitching experience in professional baseball.  He was drafted by the St. Louis Cardinals in the First Round of the 2005 Major League Baseball Draft.  He was drafted out of Wellington High School in Florida, where he led the nation with a 0.25 ERA.  Tyler’s vast pitching background expands amongst several MLB organizations including the St. Louis Cardinals, Pittsburgh Pirates, Washington Nationals, and New York Mets.  His professional baseball career has taken him all across the nation and the world; spanning with teams from Nevada with the Las Vegas 51’s, Hawaii with the Honolulu Sharks, North Dakota with the Fargo-Moorhead Redhawks, Puerto Rico with the Indios de Mayaguez, and Mexico with the Tigres de Quintana Roo.  One of Tyler’s experiences last year was pitching for Team Israel in the 2017 World Baseball Classic in which Tyler said it was "the best experience I've ever had in baseball”.  Tyler is excited share his baseball experiences and pass along his vast pitching knowledge to our next generation of baseball players.

John Wagner, as know by his peers and players as “Wags” has an extensive coaching background in professional baseball and women’s college softball. He has coached and managed at multiple levels. He has also been a private hitting instructor for numerous years working with many current and former professional baseball players.

At the collegiate level, John spent three seasons as an assistant with the women’s softball team at Towson University, a Division 1 school. At Towson, he was actively involved in all aspects of the program including budgeting, recruiting, practice planning, travel planning, and student athlete academics.  One of his main responsibilities was working with the hitters using the RightView Pro video analysis system.